This document investigates the theory behind the PI-tank, which is a subject dating back more than a century. The challenge is to find a working design that is understandable. Most amateur solutions consist of tables or equations without explanation. Some on-line calculators refer to equations stated in historic documents. However, I have an aversion to using equations without understanding derivation and without knowing the source. The purpose of this document is to investigate the derivation of the equations and check them against other sources.

The wanted impedance at the input is Rp 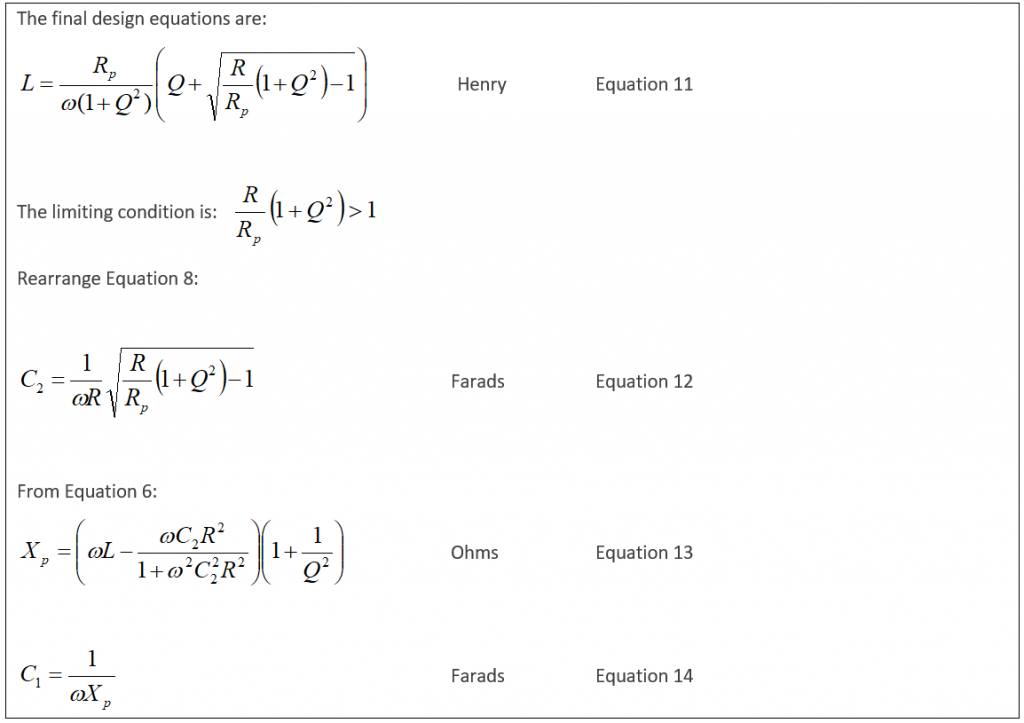 Derivation of the above equations

Taking C2 and R in parallel, the combined impedance is the product over sum:

Taking into account the series impedance due to ‘L’:

Convert this into a series circuit by multiplying the second term top and bottom by the complex conjugate. This removes the ‘j’ terms in the denominator:

In a series circuit, the circuit Q is defined as the ratio of reactance to resistance. Some texts complicate the issue by referring to loaded and unloaded Q. Here, Q is assumed to be the loaded Q which is the Q of the tank circuit with the load R connected (This is 50Ω in this case). An assumption is made that the coil and capacitor is constructed from low loss components and that the unloaded Q (The Q without R connected) is much higher than the loaded Q.

Hence the value of Q is:

The next stage is to convert the series circuit, Equation 3, into a parallel circuit. When converted, the result will be a parallel resistance known as the dynamic impedance in parallel with an inductive reactance. The capacitor C1 is then placed in parallel and is used to tune the inductance to resonance.

The next stage is converting Equation 3 into an equivalent parallel equivalent circuit using the following equations. The subscript ‘s’ means ‘series’ and ‘p’ means ‘parallel’. These results are derived in the appendix to this document.

Hence, substituting for the series components:

Rearrange Equation 5 to give:

Strictly speaking the square root is plus or minus. However, the correct sign in this application is positive. Now substitute Equation 7 into Equation 4:

Equation 10 is now solved for L: 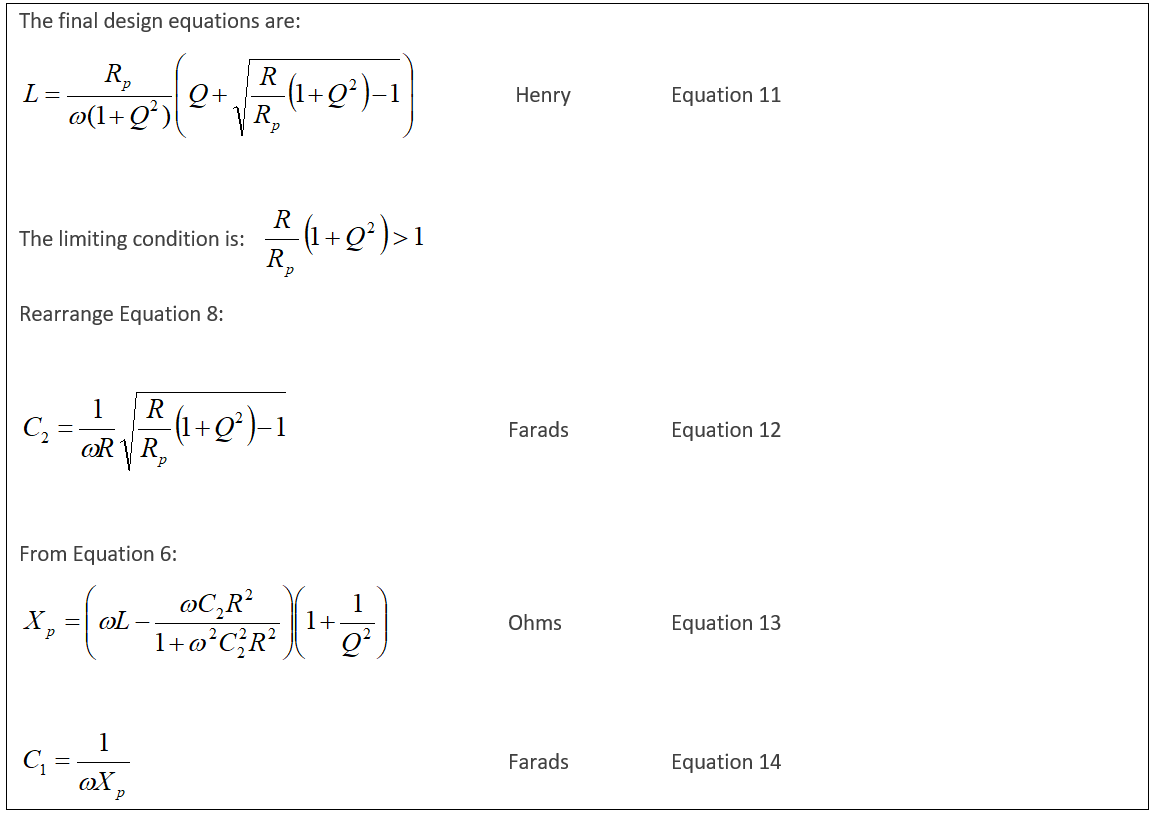 • In equation 11, the only terms are the anode load impedance Rp, L, R and the circuit Q.

• The value of equation 12 does not depend upon L.

To provide an example, Figure 1 shows a MathCad worksheet for 2MHz, a Q of 11, a load of 50Ω and a target anode load impedance of 5000Ω. It is best to calculate the parameters in the order: equations 11, 12, 13 and then 14. The Mathcad sheet is WYSIWYG and calculates the formulas numerically as shown below. The phase plot shows that, at resonance, the impedance looking into the PI-tank is indeed 5000Ω resistive. 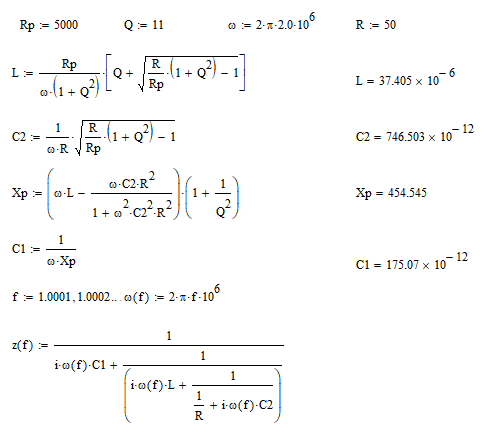 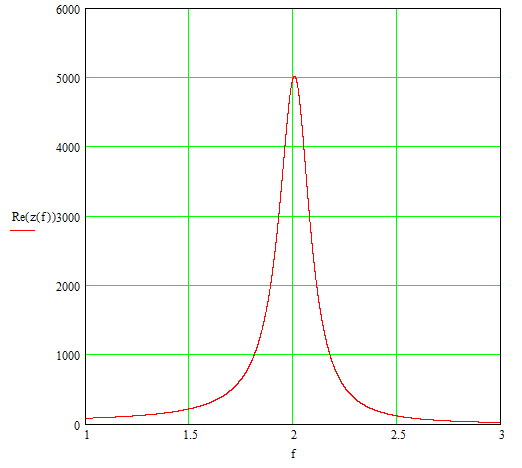 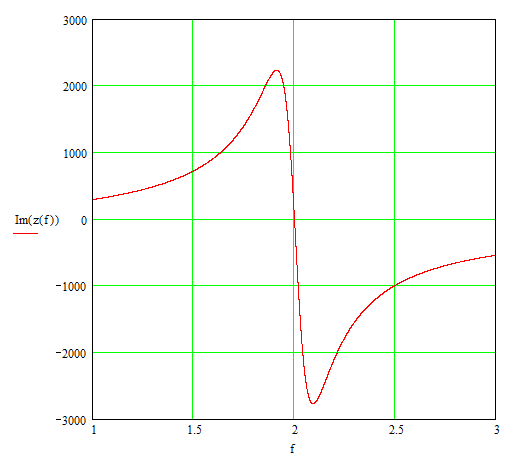 Very often, we need to calculate C1, C2 and the associated Q for a given inductor value. This happens when a practical coil is wound and the resulting inductance is close to the idea value but not exact. In this case, you will need to know if the tank will tune without having to actually try it for real. Rearranging equation 10 gives the Q:

This rearrangement is quite tricky to calculate. Q ends up as a quadratic equation with two solutions. The above is the correct version. The derivation of this equation is provided in Appendix B. Equation 15 is used to calculate the Q before evaluating equations 12, 13 and 14 to determine the other parameters. The components are assumed ideal.

Comparison with other Calculators and Designs

An objective of this document is to compare the values predicted by equations 11, 12, 13 and 14 against other designs and on line calculators. For this comparison I assumed an anode impedance of 5000Ω to allow comparison against the G2DAF design. I included amateur bands all the way down to 475kHz.

Note 1: This is taken from the excellent OwenDuffy.net site that presents an on-line calculator based on the Eimac “Care and Feeding of Power Grid Tubes 5th edition 2003” book. On inspection, the equations presented in the Eimac document turn out to be (essentially) identical to the equations derived here. There are some differences in appearance but these can be shown identical by suitable substitutions. The results are identical. https://owenduffy.net/calc/pi.htm

Note 2: https://www.changpuak.ch/electronics/calc_18.php The web site does not state the equations or the source of the equations but the results are the same numerically. I suspect the calculator uses the same source as the OwenDuffy.net calculator.

Note 3: The document by G2DAF states that the method of calculating the PI tank components is an approximation. Surprisingly, the results are similar particularly the inductors. With variable capacitors, the tank circuits would be perfectly acceptable. Note that the G2DAF results were calculated for a Q of 12 and output impedance of 75Ω and not 50Ω.

Note 4: This data is presented as a table for Q=12 only. Note the frequencies are approximate. No explanation for the data or derivation were given. Later, in the 1997 ARRL handbook, the method of calculation changed and equations are quoted. Unfortunately, the tables now only covered loads from 1500Ω to 2500Ω. The 1997 book provided software to calculate other values.

Metaphorically speaking, I have reinvented the wheel and taught grandma how to suck eggs. Most of the existing calculations provide perfectly satisfactory results. For me it has been an interesting investigation and I now understand the PI-tank a little better.  The only limitation I can see in these calculations is the condition:

If you attempt a large impedance transformation, the loaded Q must be sufficient. For example, transforming 50Ω to 5000Ω, the Q must be 9.95 or greater. If you try to calculate results for lower Q, then C1 and C2 become complex which is nonsense.

I conclude that the OwenDuffy.net site provides identical results and involves no approximations. I recommend using that site with confidence.

Appendix A – Convert a Series Impedance to an Equivalent Parallel Circuit

This appendix demonstrates how to convert from a series to a parallel tuned circuit of known Q. 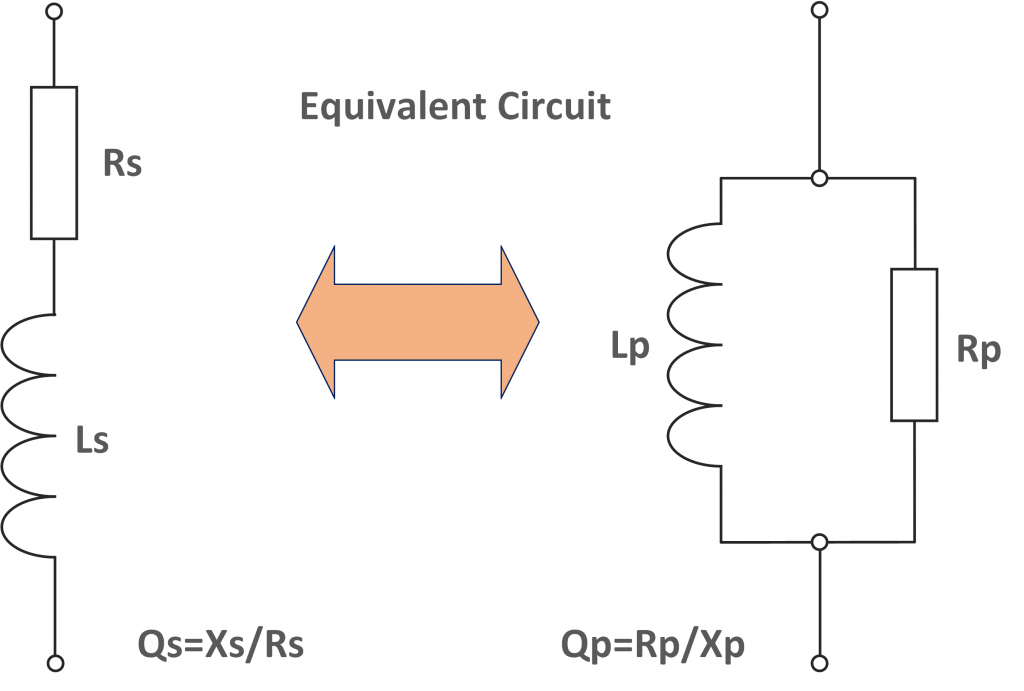 The circuit Q is identical in both arrangements because the circuits are equivalent. In the above example, the reactance is inductive but expressions can easily be calculated for capacitive reactance (not done here).

First, find the parallel impedance by taking the product over sum and then multiply top and bottom by the conjugate of the denominator:

Express this in series form:

However, for a parallel connection, Q is defined as the parallel resistance divided by the reactance:

So, rearranging equations A1 and A2:

To convert in the other direction from series to parallel, rearrange equations A3 and A4:

Some engineers avoid using secondary parameters such as Q because it can cause confusion. In this case, Q removes unnecessary complexity and is quite useful.

End of Appendix A

Appendix B – Convert Equation 10 into Equation 15

This is quite tricky and took several attempts so I recorded the arithmetic for posterity. The task is to express equation 10 making Q the subject:

First eliminate the square root by rearranging and then squaring both sides:

Multiply out and add 1 to each side:

Arrange as a quadratic in Q:

Hence, taking the positive option (this is the one that works – found by trial and error)

Sorry that was so tedious!